Welcome hunters of reading treasure and possessors of treasures. Issue 6 is proud to welcome aboard Bob Waldner as our newest Hidden Reads’ contributors and we are happy to bring you another Hidden Read from Jeannie Meekins. Finally, we have a full book review of “Lila’s Choice” by Laura Brown. Please ENJOY! 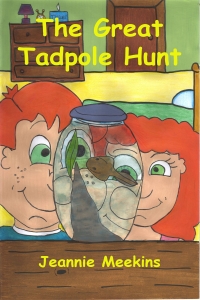 “You stole Freddie!” Billy yelled, pushing George in the chest.
George stumbled backwards, slipped and fell in the mud. All the other kids began laughing as George sat there looking up at a furious Billy.
“I didn’t steal Freddie.” George tried to hold back the tears. “Why would I want him?”
“To get me into trouble.” Billy kicked at the mud, splashing more over George.
“So, it’s my fault you can’t even look after a stupid tadpole for the holidays.”

Billy has been given Freddie, the classroom tadpole, to look after over the school holidays. He thinks it is an easy job; a tadpole doesn’t need any looking after.

When school goes back, Billy packs his backpack with his lunch and his footy. He grabs Freddie’s jar from his dressing table, only to discover the tadpole is missing! And there is something else in the jar!

Join Billy as he searches for the tadpole, then tries to find another to take its place – and discovers exactly what has happened to Freddie.

A story aimed at younger readers who are ready for their first chapter book. Reading two chapters a night will see your child waiting and guessing to see what comes next. Vivid illustrations make the story easy to follow.

Explore the wonders of nature and see if your child can figure out what has happened to Freddie before Billy does.

Have a sneak peak with Amazon Look Inside! CLICK HERE

Jack Caufield never imagined that he would wake up one day and find a dead woman in his bed. That sort of thing wasn’t supposed to happen to guys like him. He was on his way to law school, but instead of fielding Socratic questions from law professors, he finds himself facing the third degree from a bunch of angry cops. Despite their efforts, they find nothing incriminating, and Jack is allowed to get on with his education and his life. Over the next fifteen years, he becomes a modestly successful corporate lawyer, a well-paid but insignificant cog in the Wall Street machine. He’s resigned to playing a disappointing role in the system that he has come to disdain, until he learns that his encounter with that unlucky girl may not have been coincidental. Confronted with the possibility that the men who run the prestigious financial institution that he now represents may have been involved in a shocking conspiracy, his search for the truth is complicated by the knowledge that discovering it could cost him the success that he’s spent his life chasing.

Have a sneak peak with Amazon Look Inside! CLICK HERE

Sinister Reads is a project managed by the Australian Horror Writers Association (AHWA) used to promote the work of its members. Horror writers take their craft seriously and professionally – people get a thrill out of being scared, not necessarily being grossed out, but frightened by things they know cannot harm them in reality. Horror can but doesn’t have to be violent or bloody or disgusting; what it needs to do is to create fear in the reader.

Lila’s life is turned upside down when her oldest friend announces he is coming to town. Friends since they were five, new feelings she was not expecting start to bubble with his pending arrival. When she discovers the feelings are reciprocated, life seems perfect, but he knows her too well. When it emerges that another has feelings for Lila, her confusion begins. I am not giving away any huge plot spoilers by stating that Lila has to choose between two men – the front cover and the title make that obvious. The problem is, how can Lila decide when she doesn’t even know she has to choose? Never fear, with meddling friends and family, and a school full of ready minions, she will know soon enough.

This reader is not usually a fan of chick lit or romance novels, yet Lila’s Choice was surprisingly entertaining and sucked me in from the first page with intelligent symbolism and beautifully placed comedy. An early scene that caught my attention was during a warm interaction between Lila and her unknown choice where, “… he reached forward, grabbing a heart-shaped stress ball.” He tosses it back and forth as she speaks about the other man in her life before Lila turns the conversation to his failed relationship, at which point, “He placed the heart back on the desk where it slowly grew back to normal size.” A simple scene in which the reader learns a great deal about the characters through dialogue and the strength of seemingly unattached symbolism.

The setting provides a slice of originality with a group of work colleagues and friends who are teachers and counselors at a school with a large population of hearing impaired students. I found this difference interesting and educational as the adults interacted with hearing able and hearing impaired students. The author did a brilliant job of presenting the visual aspects of these interactions through the written word. The ability for some characters to speak without words while other cannot, leads to smart one liners and hidden jokes shared between Lila and Ette. The relationship of these two strong and focused women runs a thread of humor throughout the novel that gives it a lighthearted and entertaining appeal.

The characters play off each other and are so believable that you cannot help but fall in love with them all. The dialogue throughout is very natural and stays true for each character. There is a set style for each that separates them as individuals. The characters, though not personally explored in great depth, are so easily relatable that I felt like I knew the core of each. Characterization is built through the interactions of the friends and you could easily classify the individuals. Nate is the sweetheart, Ette is the partier, Kent is the whiner, Bryce is the cool kid, and Lila is the unknowing glue. That’s the simply classification though each develops in their own right throughout the story.

One aspect that I was completely shocked by was my character loyalty as a reader. Usually, when a main character must choose between two others, especially in relation to love, the reader will have a strong connection to one or the other and see that one as the hero. The reader will want for that character to “win” and will even experience anger at the main character for her stupidity in not making the obvious choice from the beginning. The smart writer drives the readers in this way to ensure that the reader gets what they want at the conclusion – the choice is made and the reader feels satisfied. Laura Brown has accomplished something I have not experienced before: she made me feel so deeply for both characters that she could have flipped the outcome and I, as a reader, would have been just as satisfied. If this was intentional or not, I do not know, but it doesn’t matter. I applaud Laura Brown for this achievement.

Lila’s Choice is extremely well written and tells a fun yet heartfelt story. As a reader, I was not overloaded with twists and turns, but rather presented with an easy read. That is not to say that it was not thought provoking, on the contrary, the woven symbolism and clues are enough to entice me to re-read and look for those little things I may have missed. Plus, the characters have purchased a permanent space in my mind and opened me to reading more in the genre. I thoroughly recommend Lila’s Choice to those interested in the chick lit and romance genres and to those that shy away from it. This is a great read simply for it’s entertainment value, but be warned, it will pull at your heartstrings and tickle your funny bone.